Questions on the Transhumanist Declaration

After reading some essays of Ray Kurzweil, indicating that this is indeed our next evolution shift: the merge of biology and technology, I found the following information, and It triggered some thoughts I'd like to share.

Do you think that what will remain of us, without any biological part left, could be considered an evolution of the human race? I'd rather call it a flowing Back-up of it.
I strongly believe that the universe gave way to the biological form evolved into humans, under the very specific conditions of this planet with a purpose:  awareness. Getting rid of the system that makes life possible can not be part of our evolution as humans. Will we let technology replace life? I think real evolution will depend on looking after it and give it the value that it has, that is the challenge for our race, and the bases for further evolution.

Other considerations :
- What reliable power will decide the "selected" legacy that will be input for the NEO/POST “human brain"?
- What kind of energy supply will power the non-biological parts?
Considering the actual energetic situation and the perspectives of "not needing a planet anymore" indicated on the declaration: is the plan to have a floating atomic energy station to fuel the “units”? I think we have seen enough movies!
Or better! the energy should come from the activity of the biological part left of the "Unit"! ...
I can very well imagine a living muscle contracting like a heart to generate electric impulse but for supporting this (as we'll have no planet), we should at least have some kind of hydroponic container... very sad! .

Taking it seriously, my conclusion is that this is not the beginning of our evolution as humans, this is the expression of our failure to deal with our human consciousness, we just can't handle the idea of death. This is the ultimate form of slavery and an exponential road towards self destruction. We somewhere, somehow, sometime lost the secret... and here we are, trying to get rid of our biology… let’s see how far we get (with no legs, and an individual cognition of digital means running along a digital highway powered by who knows what operating system).

It's time to be grateful to nature and stop fearing for death as death is a condition for life. We should thank both, life and death and honor all what died before to bring us to life “in this magic place, in this wonderful (and challenging) time”.

PLEASE, let us enjoy and experiencie all stages of our human existence.
Let us be born, grow, be adults, reproduce, get old and die, IN PEACE.
Posted by R.A.D.Argentina at 7:17 AM No comments:
Labels: - Transhumanism 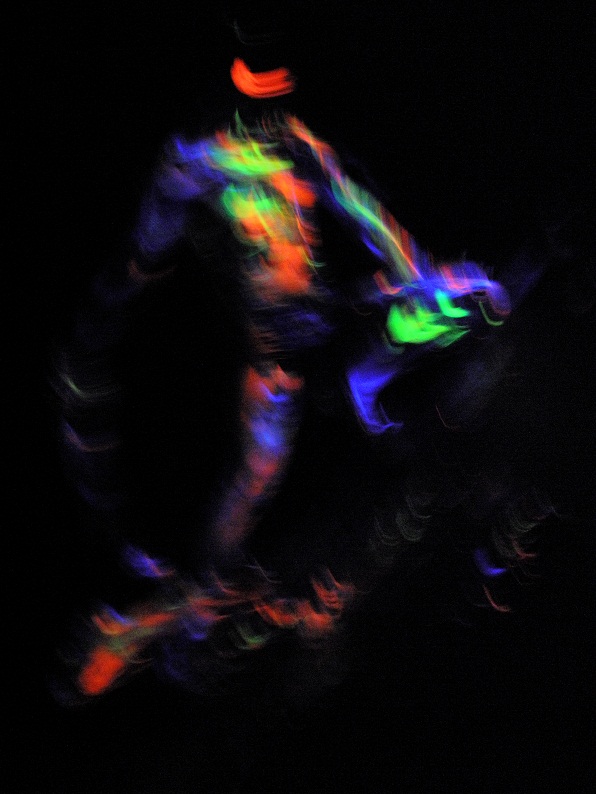 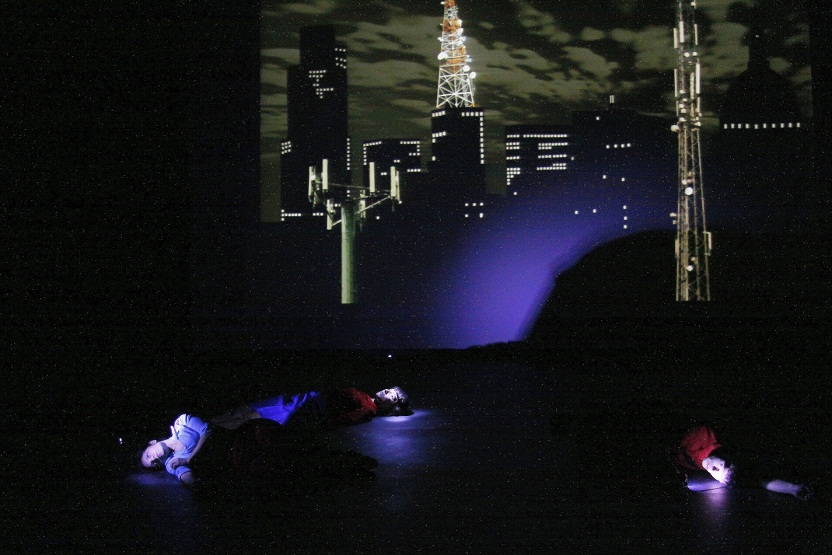 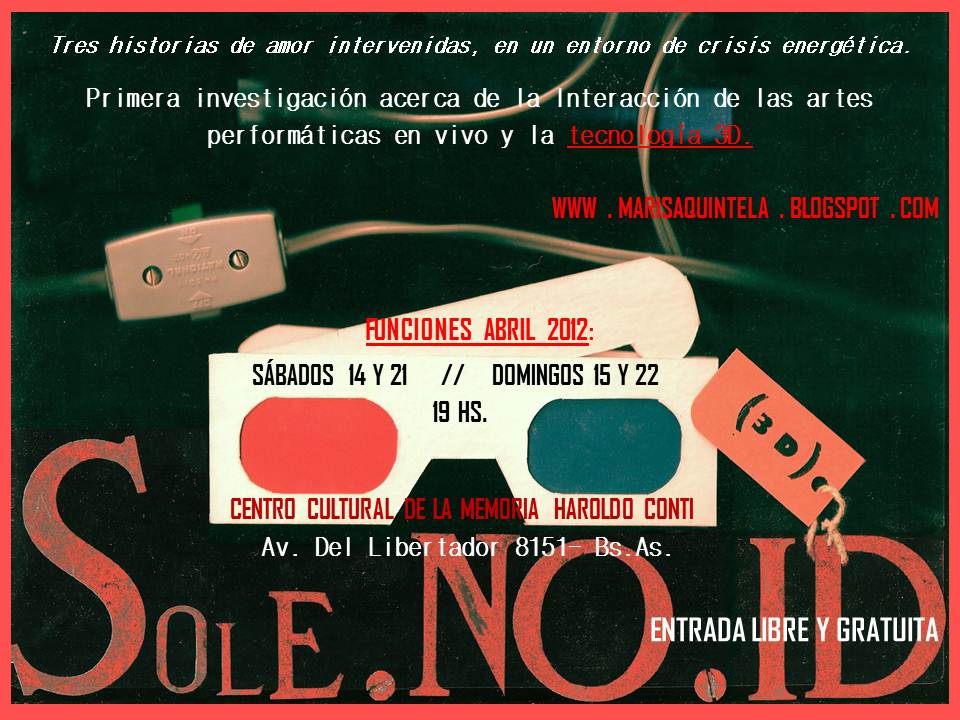 She is Member of International Dance Council (CID-UNESCO), Bachelor of Information Systems graduated from USAL University, actively participates in projects of ecology and sustainable development and finished studies of Traditional Chinese Medicine at Neijing Foundation Argentina where she continues the Post Grade Level and does medical practices.
Posted by R.A.D.Argentina at 4:21 PM No comments:
Labels: - CV - Marisa Quintela 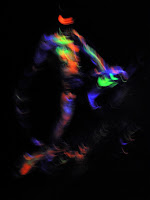 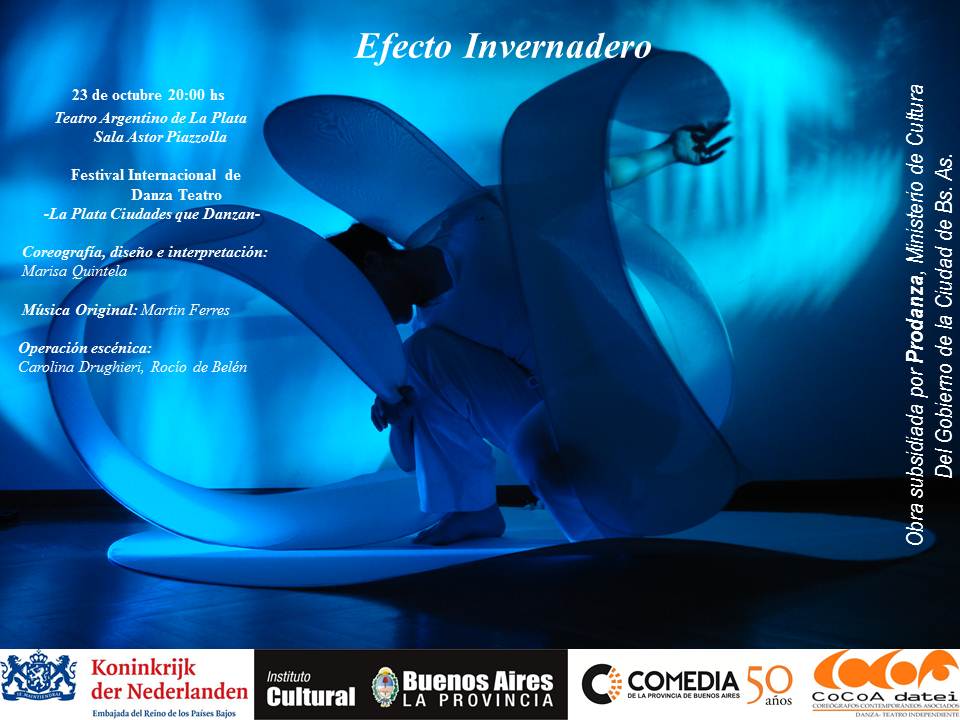 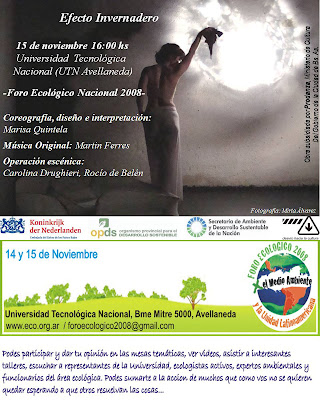 info : National Ecological Forum 2008
Posted by R.A.D.Argentina at 3:35 AM No comments: With the support of Prodanza, Ministry of Culture of the Government of Buenos Aires and the Dutch Embassy in Argentina.

The piece is an investigation on recycling, use of resources and rational use of energy. An Investigation about the coexistence of the concrete and the abstract.

Greenhouse Effect, inspired in the climate change, recycles artistic, stylistic and technical elements from the past into the eclectic contemporary art form. Its escenography is almost fully made out of recycled material. All lighting effects are made with four (less if possible) old spots from the 60’ties of 500 watts. This is a low Co2 emission piece which promotes hand-made work, recycling and rational use of energy.

Greenhouse effect is a contemporary dance piece where the concept of Choreoformography*, merges visual arts and dance in a poetic evocation of nature trough hand-made moving designs. The vital manual live lighting and scenic transformations in charge of the two stage managers interplay with the performer and designs to depart on a journey through the different energetic identities that rule the transformation of the elements of nature.

Choreoformography is a design technique based on Modern Visual Arts Applied to dance oriented to the total abstraction of the human body form. The concept is inspired mainly on the legacy of the Bauhaus movement in the field of experimentation on the scenic application of spatial arts and their relationship with movement (Oskar Schlemer & V.Kandinsky) and also Alwin Nikolais’ later on. Nevertheless, there is a significant difference with Nikolais work in the kind of design of Choreoformography*,more related to Calder's work. Everything has a secret soul. Kandinsky

An artist is not paid for their labor, but for their vision. James McNeil Whistler

Inspiration exists, but it has to find you working. Pablo Picasso

Technique is important...but only on the condition that one has so much that it completely ceases to exist! Picasso

Do not bother about being modern - Unfortunately it is the one thing that, whatever you do, you cannot avoid. Salvador Dali

Drawing is like making an expressive gesture with the advantage of permanence. Henri Matisse

Color! What a deep and mysterious language, the language of dreams. Paul Gauguin

Abstract art is inherently about the search and about not finding anything. Gerhard Richter

Color is where our brain and the universe come together. Cézanne

Only an artist has the patience to spend a lifetime to become an artist. Hedda Sterne

I am always doing that which I cannot do in order to learn how to do it. Pablo Picasso
Posted by R.A.D.Argentina at 7:26 PM No comments:
Labels: - Interesting Quotes Action Net for the Enviromental Defense To be part of the net, send an e-mail to:

An attempt to promote awareness about the different problems that affect our Earth.

Thanks for your help in the fight for a sustainable future.

- Biofuels Reprot EC 2006/07
This above is the reason why countries like mine, had to give most of their ground to Monsanto GMO Soja, devastating Traditional Idian Comunities, Flora and Fauna, diversity of producction for internal consumption and other consecuences like healt problems.